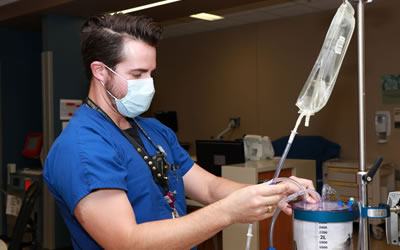 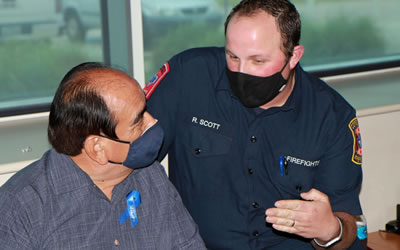 Philip Mavridis had just completed his shift as a registered nurse in Parkland Memorial Hospital’s Emergency Department. Just as he had done every shift prior, Mavridis donned his helmet, climbed atop his motorcycle and headed north on I-35.

That’s all he remembers of June 16, 2018. What he knows of the events that unfolded that Saturday morning are a patchwork pieced together from police, paramedics and eyewitness reports of the crash that nearly took his life.

Mavridis, Mario Reyes and others took part in Parkland’s annual Trauma Survivor’s Day held Saturday, May 22 at Parkland’s Simmons Ambulatory Surgery Center. It was a chance for survivors to connect with one another after a serious traumatic injury and help ease the anxiety, fear and frustration often experienced following a sudden injury and resulting hospitalization.

More than 800 trauma patients hospitalized between January 2019 and March 2021 were invited to the in-person event, which also included staff from the Rees-Jones Trauma Center at Parkland, surgical ICU, orthopedics, neurology and physical medicine and rehabilitation.

Mavridis was among those who described their injuries and what they have experienced on their road to recovery.

“I was in the middle lane heading north, somehow lost control and ended up laying my bike down on the pavement,” he says matter-of-factly. “I remember sliding under a van or an SUV that was in the next lane. After the crash, I’m told that I was able to stand, was alert and oriented and gave the paramedics my parent’s information.”

He was awake and talking as he was being transported to Medical City Plano, but at the hospital Mavridis coded. Providers were able to revive him and physicians placed bilateral chest tubes due to a hemothorax (a collection of blood in the space between the chest wall and the lung) and an ED thoracotomy (cracking of the chest) was performed during a second code prior to him being rushed to the operating room where doctors performed a splenectomy for a ruptured spleen and worked to control massive internal bleeding.

Mavridis was hospitalized for nearly a month for a broken right collar bone, broken ribs and had 20-25% burns (road rash) on his legs, abdomen, back and ribs from sliding across the pavement after the initial crash. During that time, he spent more than a week on a ventilator in the hospital’s ICU.

“For someone who was in good shape prior to the crash, I was very sick,” Mavridis said. “Basically, everything that could go wrong was going wrong.”

Diagnosed with acute respiratory distress syndrome (ARDS), Mavridis underwent a tracheotomy and spent time in the hospital’s burn unit recovering from skin graft surgeries to close the wounds from the road rash. After four months of extensive in- and outpatient rehab to regain his strength and to allow his wounds to completely heal, Mavridis was able to return to his job at Parkland where he has since become a nurse in the hospital’s Rees-Jones Trauma Center.

As for getting back on a bike, Mavridis says those days are behind him. “I’m definitely not riding anymore,” he said firmly. “It’s just not worth it.”

Saturday, Aug. 22, 2020, had been a pleasant day for Mario and Katie Reyes who were on their way back to their Coppell home after dropping their son off at college in Houston. But things took a near-deadly turn just outside of Corsicana when, while traveling at just over 70 mph, Reyes hit a 350-pound cow head-on. The impact caused Reyes’ SUV to flip and roll three times onto the frontage road. The airbags did not deploy.

Reyes, a retired Alcohol, Tobacco and Firearms (ATF) agent, said EMS personnel had to use the “jaws of life” to extricate his wife from their badly mangled vehicle. Covered in blood, she was immediately flown to Parkland’s trauma center for care. Glass fragments had penetrated Katie’s face, arms and body which caused most of the bleeding. She also suffered a broken nose and a severely bruised left side. At first glance Reyes said he appeared to be unscathed with “not a hair out of place, with no external bleeding,” but he quickly found himself fighting for his life.

“They began asking me questions, but I didn’t know what day it was. What time it was. How many quarters it took to make a dollar,” Reyes said. He “flat-lined” from massive internal injuries as he was being transported to a local hospital. Ninety minutes after his wife had been flown to Parkland, Reyes was also in the air heading to Dallas.

Reyes’ condition was grave – 10 broken ribs, lacerated liver, collapsed lung, dislocated shoulder with a ruptured artery and nerve, damaged gallbladder and massive internal bleeding – all in the middle of the COVID-19 pandemic.

“I saw my wife briefly in the ER but because of COVID and the hospital restricting visitors, I didn’t get to see her in person again for more than a month,” he said, his voice wavering as he fought to hold back tears. “That was by far the hardest part.”

Reyes spent the next 32 days in ICU, which he describes as a lonely and emotional time.

“But I had the support from the Parkland staff to get me through it all. Talk about amazing! The trauma and ICU team did an unbelievable job to put me back together again, like Humpty Dumpty,” he said.

In the weeks and months since the crash Reyes has undergone nine surgeries, worked to regain mobility and strength in his damaged shoulder and has been able to resume serving as a nationally-ranked elite level softball umpire, a task he’s relished for nearly 40 years.

“There just aren’t enough words to express my gratitude to the Parkland staff,” Reyes said. “I am truly blessed to be alive.”

State Fair Of Texas Indoor Spaces Will Be Protected With Activepure

State Fair Of Texas Indoor Spaces Will Be Protected With Activepure 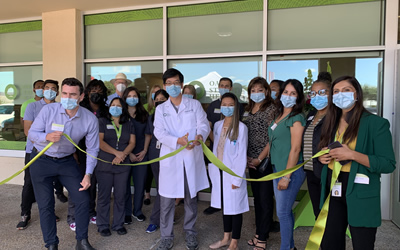